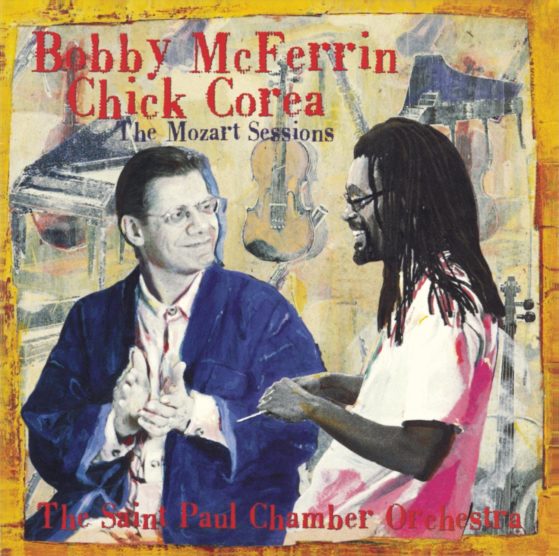 Like other pianists of his time, Wolfgang Amadeus Mozart prided himself on his ability to improvise at the keyboard, both in solo works and concertos. That long-abandoned practice is one of the elements of Mozartean style that conductor Bobby and pianist Chick Corea explore in The Mozart Sessions, which includes recordings of Mozart’s Piano Concertos No.20 in D minor, K.466, and No.23 in A Major, K.488, performed with The Saint Paul Chamber Orchestra. The Mozart Sessions was released in October, 1996.

Not only does Corea play his own cadenzas in the concertos, he and Bobby link their individual improvisations to lead the listener directly into each of the concertos. What makes these improvisations so unusual is the fact that both Bobby and Chick, a jazz pianist, bring their own distinctive creative styles to bear on Mozart’s music. Improvisation was considered an essential talent for a concert pianist in the late 18th century. Both Mozart and Beethoven dazzled audiences with their skill at improvisation. When he was still a performing pianist, Beethoven frequently played Mozart’s D minor concerto — one of the few Mozart works he championed — adding his own cadenzas, which have become standard since Mozart’s own cadenzas for this concerto were never notated.

With their inimitable Mozart improvisations drawing the audience into a performance of the same Mozart concerto, McFerrin and Corea, joined by the Orchestra of St. Luke’s, were featured in a PBS “Great Performances” concert special entitled “Classic Innovations”.